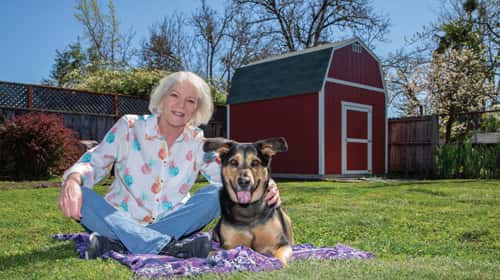 During the workweek, the day begins for KSRO Morning News-Talk radio host Pat Kerrigan well before dawn. The alarm goes off between 2 and 3 a.m., depending on her workload and the current news cycle. And though she’s been in the business for 40 years and has hosted the morning drive program for the last four, it’s still not easy. As she puts, it’s a “struggle to consciousness.” Every. Single. Morning. But once she gets moving, she flips on the TV in her Kenwood home and grabs a Coke from the kitchen. “I’ve never had a cup of coffee in my life,” she says. “Never liked the taste.”

She gives herself a half hour to wake up, digest the news, interact with ABC news reporters in New York, and give her dog, Chance, a treat. “She only wakes up long enough to get it,” she says with a smile, referring to the black-and-tan shelter pup she and her wife, Michelle, adopted three years ago.

After a 20-minute drive to the Fox Plaza in Santa Rosa, she arrives in the studio sometime before 4 a.m., usually in slacks, a t-shirt-jacket combo and comfortable shoes. Once there, she connects with her producer, Dan Trucios, and prepares for the morning show. In the last few moments before she goes on-air, she turns her attention to the KSRO crew around the table and says, “Let’s make some magic!” At 6:02 a.m., she turns on the mike, greets her listeners and is ready to roll, while keeping an eye on the four video screens tuned to different news outlets.

A finger on the pulse

Kerrigan keeps her finger on the pulse of the county, addressing a wide variety of topics—ranging from the first day of spring to the latest on local politics and sports, hot topics, recovery efforts following firestorms and floods, and more recently the COVID-19 pandemic that’s gripped the nation as well as the North Bay.

For those who regularly tune in to her program, Kerrigan is the voice of Sonoma County, known for her straightforward, down-to-earth manner. She’s knowledgeable about a broad range of current affairs and not one to veer away from asking hard probing questions, or tackling politically-charged issues. Kerrigan is a pro in the business of broadcast news, who puts guests at ease with her quick wit and warm sense of humor, offering engaging content day after day. Those who know and work with her, recognize that she’s a natural in the business. She’s respected for her journalistic integrity and professionalism, well liked around the office where she works, and a pillar of strength in a crisis.

And though she has a loyal fan base and was honored with a prestigious Marconi Award in 2018 as “Radio Personality of the Year” by the National Association of Broadcasters, she’s had her personal struggles. When she took an extended leave of absence from KSRO, which began in October 2019 and extended through most of January this year, it left her regular listeners wondering when—and if—she would return.

During her first day back on the job, on a Monday morning in January, Kerrigan turned on the mike for the 9 o’clock hour. Something to talk about by Bonnie Rait played in the background before fading out, then she took a deep breath and touched on a deeply personal matter, “It’s been awhile since I sat in this chair and I’d like to thank the many people, who’ve reached out to me with questions where I am and what’s wrong with me…. If you’ll grant me the indulgence for the next few minutes, I’d like to tell you about that. I’ve committed to truth in broadcasting, and it’s time to put my money where my mouth is. I am an alcoholic. It is a situation I’ve been suffering with for many years with varying degrees of success with that battle…the monster that is alcoholism does not diminish when left untreated.”

She admits there was a moment of hesitation before disclosing the truth on-air. Am I really going to do this? She asked herself. Yeah, you are. “It felt good when it was over. As to her message that morning, she had given it considerable thought. “So many people are affected by this disease that I knew to weigh my words carefully out of respect for the people who were listening and for people who suffer from the same thing, or are connected to someone who is. That was the weight of it to me.”

Later, when she went on break, she felt a sense of relief wash over her. “But then I thought, okay, let’s shift. Back to business.”

In the days and weeks that followed, the response from her listeners took her by surprise. “I had no idea that the response would be so enormous or far-reaching. Cards, letters, posts and calls. The vast majority were incredibly supportive—an embarrassment of riches. I wish I could spread that love around to all of those who suffer,” she says.

Though it might seem that the daily pressure of working as an on-air morning news host might cause a dependence on alcohol, especially following the October 2017 firestorm when most other forms of communication were down and she was working nonstop, that wasn’t the case for Kerrigan. “I wasn’t aware of the pressure [then] because there wasn’t time for it,” she says. “It never occurred to me to have a drink.”

For Kerrigan, alcoholism was an unexpected monster that crept into her life slowly before taking hold. “Alcohol has always been part of my life. I come by it quite naturally. At first, I was just a partier. I’ve probably been an alcoholic my whole adult life, but functional until my 50s, [then] it became more of an issue, primarily because it was getting tougher for my physical body to recover from the over-the-top bouts.”

Like many alcoholics, Kerrigan kept the problem private. “I isolated—doing my drinking at home. The good news about that is fewer people are impacted overall. The bad news is there is full freedom to go long. And go hard. And I did.”

There was no single defining moment when knew she needed professional help, Kerrigan says, just a persistent nagging sense that her life lacked joy. “There was the complete inability to experience joy. That was profound for me and profound for everyone around me—my wife, my sister and some close friends. That is the antithesis of who I am.”

For those on the outer circumference of her life, she was so functional that no one realized she had a problem. “People would often say, ‘You’re so lucky’ to Michelle,” says Kerrigan. “Little did they know the suffering she went through when I was drinking. Michelle suffered mightily, not knowing what she’d encounter when she came home from work. I was here, but absent and not participating in the relationship. I’m always surprised and grateful that she’s still on the other side of the sofa. She’s always believed in what she considers ‘my true heart,’ and somehow has sustained that belief through some very rough times. The only relationship I could have was with alcohol.”

Though she’s had long periods of sobriety, she occasionally found herself slipping.

Did she return to alcohol because of the pressure of her work? “I don’t think so,” says Kerrigan. “I think it’s a disease that doesn’t matter where you are, or what you’re doing. Any moment provides a reason to drink, or not to drink.”

Last October she entered a local rehab facility, knowing that the disease was impacting her professional and personal life. “I was missing too much work, and my relationships were beginning to suffer,” she recalls. She was there for 12 days, but knew it wasn’t the right place for her, and then the Kincade fire hit. “I left and went back to work, but it was too soon,” she says. “Work wasn’t the right place for me, either. It wasn’t long after the fire was out that I went back to [drinking].”

On Dec. 17, she checked into Bayside Marin, a rehab program in San Rafael that offers a holistic approach. Kerrigan stayed there through the holidays for 30 days. “The professionals there were as invested in my spirit as they were in healing my body and mind. They also understood that the 12-step program was not for me. I’m so grateful for the millions of people whose lives have been saved by it. I’m just not one of them.”

Toward the end of her stay, Kerrigan made the decision to disclose the truth about her absence on-air. “So many people had expressed concern about where I was and what was wrong with me. When a community trusts me with the truth—as our community has through many disasters—I felt compelled to tell them.”

A return to joy

May will mark six months of sobriety for Kerrigan, but for the dozen or so people she especially connected with in rehab, most of them continue to struggle with the disease. “Just two of us are still sober,” she says.

What has she learned about herself through this experience? “I feel that there’s much for me to do and be engaged in, and I have to be present for that to happen,” she says. “And I choose to be present for all the unknown adventures.”

Despite a lifelong struggle with alcoholism, Kerrigan’s sense of joy has returned and she feels blessed. “I’ve lived an amazing and very lucky life,” she says. “There aren’t many things on my bucket list because of that. I am so fortunate, grateful, amused and entertained by life. That’s why I don’t dip my toe into the pool. I cannonball. There’s so much more to do.”